Some of my earliest memories are of sitting on the heat vent on Saturday mornings listening to my dad’s Bluegrass Student Union album on the record player and of sneaking out of bed to listen to The Buffalo Bills from the hallway as the rest of the family watched The Music Man on TV after my bed time. Throughout school I participated regularly in the Reflections Contest for music composition and got as much choir, band, and musical theater as I could.  I sang with two different quartets in two different cities, and then with a merged septet when our quartet baritone went off to boot camp.

After scoring a perfect 5 on the AP music theory test I received an Associate of Science degree from the College of Eastern Utah, studying music composition and choral conducting under Russell Wilson before earning a Bachelor of Arts in Liberal Arts & Sciences from Utah State University. After college I played school board member Jacey Squires in two different community productions of The Music Man, and as part of the second became a member of The 4 Hims quartet. My love of barbershop was reignited.

I joined the Barbershop Harmony Society in 2011 as a tenor with The Kentuckians Chorus and began recording learning tracks under the mentorship of Jon Nicholas. I sang tenor with Vintage Airstream, the 2012 Cardinal District Novice Quartet champion. Job and address changes afforded me the opportunities to sing, though briefly, with Southern Gateway (baritone), Kentucky Vocal Union (lead), and The Saltaires (lead), where I was influenced by Joe Connelly, Paul Gilman, Don Gray, Jim Henry, Aaron Dale, John Sasine, and many other fantastic musicians.  In 2014 I collaborated with my 4 Hims brothers to form North Front Sound, a new men's chorus in Davis County, Utah, where I served as the first chorus President, and currently serve as the VP of Music. 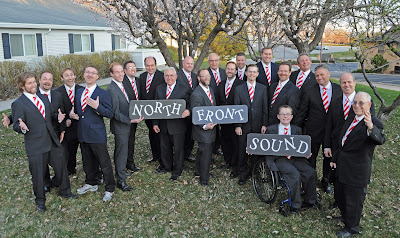 I reside in Syracuse, Utah with my supportive wife, Emily, our five children, Lydia, Jonah, Sawyer, Elliott, and Finley, and our two turtles, Sheldon and Regina Phalange. My aspirations include being 6’3”, being able to sing bass, and being as cool as Tim Waurick.